The duo has been performing and creating together since 2011, including presentations at ISIM (Int’l Society of Improvising Musicians Conference), Bucknell College, and NYC Electroacoustic Improvisation Summit, and preparing a unique set of open form compositions for their multi-faceted performance concept merging electro-acoustics, multi-phonics, extended techniques, integrated directly with scalar and rhythmic concepts.

Here is a review by Eric Lyon of our set at EIS  from the journal “Array” for the International Computer Music Association or ICMA http://www.computermusic.org/media/documents/array/array17.pdf

“Clip Mouth Unit, a duo project of Dafna Naphtali and Jen Baker performed with a high-energy mix of Baker’s trombone interjections and Naphtali’s intense yet urbane vocal stylings, combined with varied and unpredictable computer- generated textures and live processing of the acoustic sound, all presented with a comic’s madcap sense of timing. Despite a wide range of surprising musical swerves, the performance never lost focus.”

BIOs of Jen / Dafna:
Jen Baker, trombonist/composer, has collaborated with artists all over the world in site-specific mixed media performance, concert halls, solo and chamber commissions. As an improviser she is featured on the soundtrack to Werner Herzog’s Oscar-nominated Encounters at the End of the World. She has performed internationally in festivals and has toured with Arijit Singh, Karole Armitage, and Mansour, and new music ensembles S.E.M., TILT brass, and the mobile ensemble Asphalt Orchestra (founding member). Her well received new book, Hooked on Multiphonics, is treatise on extended techniques for trombone for composers and trombonists to aid in understanding and executing the deep complexities of multiphonics.

Below are the last moments of our performance at TransPecos — (the video is dark,but the sound is good.) See below for more videos and the rest of the concert.

Rest of the SWiTCH concert:

Rest of show at TransPecos: 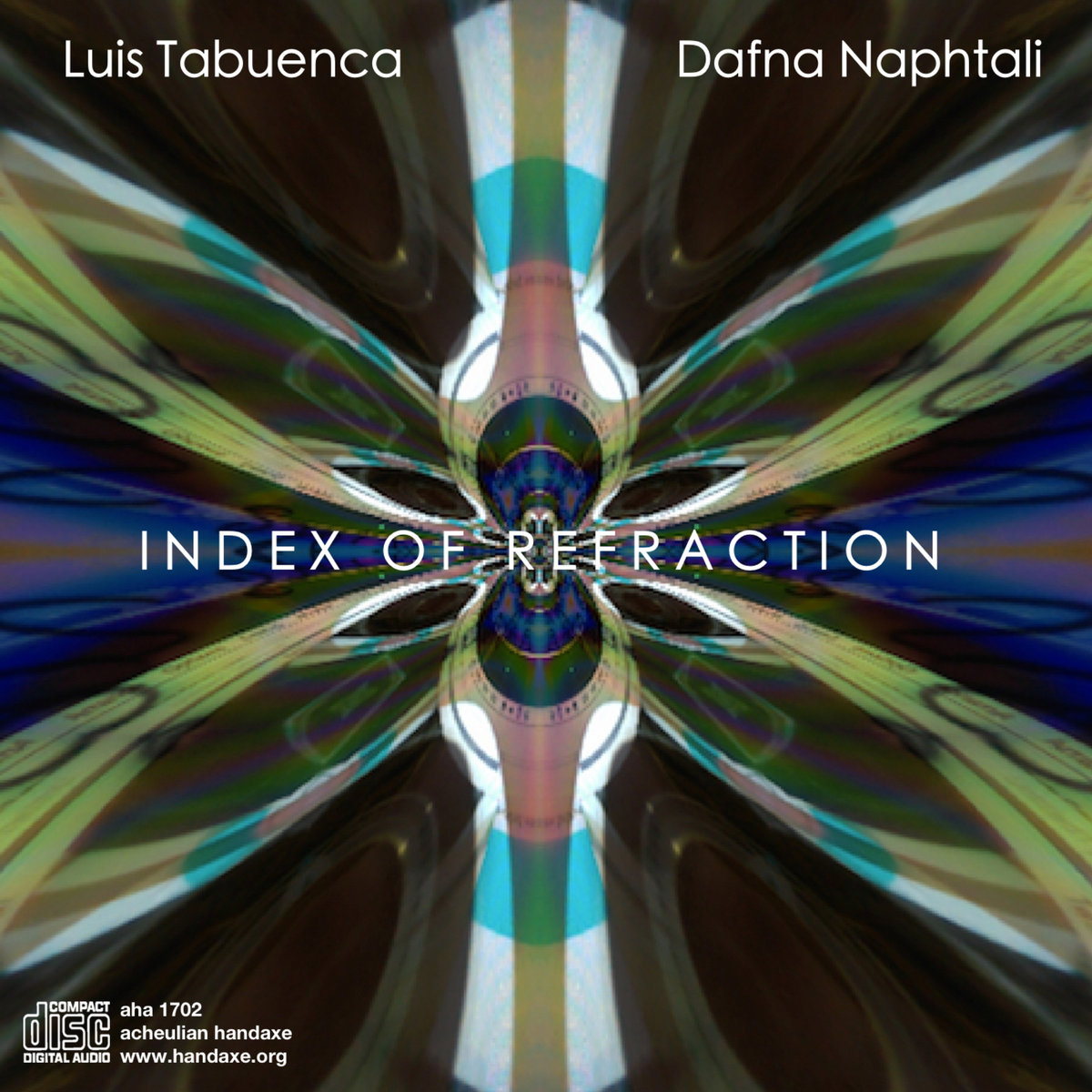 “Index of Refraction” is the debut album of the duo of Luis Tabuenca (percussion/ drums), Dafna Naphtali (voice/ electronics), recorded at Harvestworks in NY.  An Index of Refraction of a material is a dimensionless number that describes how light propagates through that medium.  Inspired by this definition, and translated/transposed to musical vocabulary– an index of refraction could be an analogy to the way in which acoustical instruments and the human voice behave when they are sound processed through electronic devices.

Tabuenca and Naphtali first met and performed together October 2013, when Tabuenca invited Naphtali to Festival Audio Tangente in Burgos, Spain, which he curated with the theme of voice and electronics. The duo’s communicative and energetic performance at the festival was the beginning of a long term project, continuing in NY, and in a new recording — “Index of Refraction” was released in April on Acheulian Handaxe as CD or digital download (also iTunes).  The album is also available on naucleshg and Bandcamp: https://handaxe.bandcamp.com/album/index-of-refraction

at work in NY:

After the duo’s initial performance in Spain, Luis Tabuenca came to NY in Spring of 2014 for a residency at NYU’s Waverly labs.   He and Naphtali performed shows around NY —  as a duo, and with other collaborators — trio with Izzi Ramkisssoon (bass), and a quintet at The Firehouse Space with Briggan Krauss (sax), Stephanie Griffin (viola) and Jonas Tauber (bass).    Their work together in NY culminated in the first album of this duo.

..about Index of Refraction:
This new duo release “Index of Refraction” was recorded at Harvestworks in NY.  An Index of Refraction of a material is a dimensionless number that describes how light propagates through that medium.  Inspired by this definition, and translated/transposed to musical vocabulary– an index of refraction could be an analogy to the way in which acoustical instruments and the human voice behave when they are sound processed through electronic devices.

This concept in mind, we improvised music while processing and manipulating our sounds, both electronically and acoustically, in order to create new sonic landscapes, each track is based on the refractive index of a different medium.

Tabuenca-Naphtali duo is available for bookings in Europe
March 11-28th 2017.

BicycleWheel-and-Feedback from Dafna Naphtali on Vimeo.

Mechanique(s) is a long time aleatoric/improvised electro-acoustic computer music project of mine using live electronics, prepared guitar, voice, and sometimes reeds or other guest instrumentalists, a duo with Hans Tammen with frequent guests.  Working together since 1998 in various configurations, Mechanique(s) has been drawing on many traditions in improvised and electronic music, investigating the overlap of various elements of the performers’ technical and aesthetic practices.

In our performances I create textures, musical elements and gestures using live audio processing of my voice, the sound of the other musician’s with whom I perform, and some audio samples. I use Max/MSP, and an outboard sound processor, both with control in real-time via my voice, MIDI and Wii controllers, Morse code and my various musically mitigated algorithms and composed music processes.

I play my “instrument” by controlling and triggering these processes as musically needed and this has been my primary method of performance since 1995 — in many different musical contexts, with my electronics processing not merely acting as a supplement my voice, but as an important live compositional tool.

Hans Tammen (“endangered guitar”) works in innovative ways with mechanical preparations and for guitar (at times including brushes, small stones, a small electric fan, a cigarette lighters, an Ebow and chopsticks) and Max/MSP sound processing, with further control via the use of pitch-tracking and and a rotating cast of gestural controllers (at one time an infrared-controller to capture some of his head motion during performance). Tammen’s approach has evolved as well and since the mid-2000’s also incorporates Max/MSP in his Endangered Guitar projects.

In our trio are we have recorded with Martin Speicher (saxophone, clarinet, Germany), (recorded in the eponymous CD “Mechanique(s) 2001 live at Logos in Ghent). We have also been joined by Pascal Boudreault (Montreal), and many others over the years with intuitive, sound-oriented approaches to their instruments.

Throughout the collaboration of Mechanique(s) we have focused on the relationship of prepared and acoustic sounds to my electronics sounds, and at times with strikingly similar timbres with completely divergent means. The audio processing algorithms I use are as varied as the possible musical gestures, registers, and density of musical sounds we make, and the various kinds of audio processing intentionally create elements of surprise for each of us — as we listen and adapt our phrases, timing and sound.

All About Jazz – Eyal Hareuveni at Hafarot Seder Festival 2005 curated by Ilan Volkov in Tel Aviv:

Mechaniqe(s) Duo, featuring Hans Tammen on “endangered” guitar and lap-top and Dafna Naphtali on vocals and lap-top, came from New York, triggering their sound sources from Tammen’s “endangered” guitar, laid on a table with the strings manipulated and mutilated with sticks, straps and other objects, then with real time processing on his and Napthali’s interacting lap tops. Tammen opts for more minimal sounds that only loosely reference a conventional guitar sound and more often sounds like a distant relative of the Japanese koto; while Naphtali deconstructs these sounds into more detailed ones, pushing them into abstract and noisy realms, then layering her four-octave range vocals on top.

CHATTER BLIP is a duo project of Chuck Bettis (electronics/throat) and Dafna Naphtali (electronics/processing/voice) — an interstellar multi-character audio operetta involving a multitude of human, alien, and machine voices, in a mash-up of primal and classic sci-fi and electro-acoustics…..    with performances since 2006.

Audio/Video of other past performances:

Bios:
Chuck Bettis, (electronics + throat) was raised in the fertile HarDCore soil, nourished within Baltimore’s enigmatic avant garde gatherings, and blossoming in NY’s Downtown Musical tribe. His unique blend of electronics and throat has led him into various collaborations with great musicians from around the globe. He has performed live with John Zorn, Fred Frith, Jamie Saft, and Afrirampo to name a few. Some of the musicians Bettis has recorded and played live with are as follows; Ikue Mori, Nautical Almanac, Audrey Chen, Yellow Swans, Toshio Kajiwara, Mick Barr, etc, plus a long history of punk bands he was in (most notably the experimental punk band Meta-matics as well as the enigmatic All Scars). Currently he is working on many of his experimental projects such as Snake Union with Dave Grant, Die Trommel Fatale with Brandon Seabrook/Marika Hughes/Eivind Opsvik/Henry Fraser/Dave Truet/Sam Ospovat, Mossenek with Mick Barr & Colin Marston, Chatter Blip with Dafna Naphtali, and Pretty Clicks with Berangere Maximin, in addition to improvising, recording, or composing with an array of musicians from around the world.  http://chuckbettis.com/

Dafna Naphtali (voice – electronics – live-sound-processing) composes and performs experimental, interactive electro-acoustic music using her custom Max/MSP programming for live sound processing of voice and other instruments, and works for multi-channel audio and musical robots. She draws on her musical background in jazz, classical, rock and near-eastern music, and interprets Cage, Stockhausen and contemporary composers, in projects with well-regarded musicians around the world, and grants/fellowships/residencies. CD “What is it Like to be a Bat?” digital punk trio w/Kitty Brazelton (Tzadik), and several CDs forthcoming in 2017.

Performer/composers Kitty Brazelton and Dafna Naphtali collaborate on a montage of extremes: textures hard/soft, noises white/red, harmony rooted/disembodied, silence.  Both women sing with startling multi-octave ranges*. Both women play electric guitar / bass. Both women compose hard-core computer music. All this is woven, spliced, patched, threaded, then drummed together by BAT’s third member: Danny Tunick.  Their eponymous CD was released 2003 on Tzadik label.   The band active 1996-2006, on hiatus, but with a new  track “Stabat Mom” still unreleased.  visit What is it Like to be a Bat ? orginal website.    Tzadik CD info here.

*Both women sing with startling multi-octave ranges: Brazelton honed her edge as vocalist in rock bands since 1969, and in the 90’s with her large ensemble DadaDah (Village Voice: “Wild-woman vocalist . . . with a wailing intensity in all her genres” ) .  Naphtali vocalizing for years in improv bands as well as classical recitals and new music ensembles.

Both women play electric guitar: Naphtali has toted hers from coast-to-coast, purveying jazz, folk, disco, whatever the gig required , while Brazelton makes unheard-of sounds on a bass guitar, with punk pick, Soviet-made fuzz box, never having played a bass before (though she’s written concertos for the instrument).

All this is woven, spliced, patched, threaded, then drummed together by BAT’s third member: Danny Tunick, percussionist extra-ordinaire, whose credits span alterna-rock and contemporary classical realms.   He’s a recorded contributor to bands Barbez, Guv’ner, Camp and Mad Scene as well as the Princeton Composer’s Ensemble, Common Sense Composer’s Ensemble and the Bang on a Can Festival’s Spit Orchestra.

While Naphtali, Brazelton and Tunick alchemize in plain view, for their 2003 CD, sound artist Paul Geluso finalized this strange brew from the mixing board.

Brazelton and Naphtali are currently mixing their newest work StaBAT Mom, which documents their lives as women in a punk digital montage true to what they have done with the Bat? trio since 1997.   This latest chapter is about what it’s like to be a working mom, and incorporates that famous statement on the all-enduring mom — Pergolesi’s 1736 Stabat Mater — singing his gorgeous soprano-alto duet with the achingly poignant major-2nd suspensions,  which they put through a computer as an isorhythmic/morse code cantus firmus, so they could play some math-rock over it. Into that they peppered Naphtali’s outrageous song fragments about losing one’s sense of reality with two active young daughters, weave in Brazelton’s 1992 lullaby written when her daughter was 3 mos. old with colic. In addition to computers and singing, Brazelton plays electric bass and keyboard and Naphtali plays electric guitar, sings, does live sound processing (and of course with Danny Tunick on drums, glockenspiel, custom music boxes, toys).

What is noise to the old order is harmony to the new…”—Jacques Attali “Please ask me if you like it.”—Gertrude Stein