Pulsing Dot, is the debut release by the duo of Gordon Beeferman (piano) and Dafna Naphtali (voice, electronics) on Clang label (Denmark) September 2017, with cover art by Julia Stoops.

In settings and improvisations for piano and voice, with kinetic sound processing, fractal rhythms, and generating polyphonic / kaleidophonic disturbances, Gordon Beeferman fleshes out protean fragments into strikingly visceral structures and landscapes that take the piano to its limit, and Dafna Naphtali augments her high energy live processing of Beeferman’s piano with extended vocal techniques/sounds/multi-modal singing and her custom take on hand and voice-activated electronics.  Pulsing Dot press release.

“An extraordinary and stunning release…extended and multidimensional..almost of orchestral and theatrical proportions to use an inadequate comparison. The music really breathes and is full of energy, not losing itself in meaningless experimentalism and stays focused and very together.” (Vital Weekly)

“The well-thought-out evolution…slowly unfolds into something more like a sonic daylight.” (Chain D.L.K.)

“Naphtali & Beeferman have hit the nail on the head with this release.. a feedback loop of seamless interaction” (Sigil of Brass)

The duo has been performing and creating together since 2011, including presentations at ISIM (Int’l Society of Improvising Musicians Conference), Bucknell College, and NYC Electroacoustic Improvisation Summit, and preparing a unique set of open form compositions for their multi-faceted performance concept merging electro-acoustics, multi-phonics, extended techniques, integrated directly with scalar and rhythmic concepts.

Here is a review by Eric Lyon of our set at EIS  from the journal “Array” for the International Computer Music Association or ICMA http://www.computermusic.org/media/documents/array/array17.pdf

“Clip Mouth Unit, a duo project of Dafna Naphtali and Jen Baker performed with a high-energy mix of Baker’s trombone interjections and Naphtali’s intense yet urbane vocal stylings, combined with varied and unpredictable computer- generated textures and live processing of the acoustic sound, all presented with a comic’s madcap sense of timing. Despite a wide range of surprising musical swerves, the performance never lost focus.”

Jen Baker, trombonist/composer, has collaborated with artists all over the world in site-specific mixed media performance, concert halls, solo and chamber commissions. As an improviser she is featured on the soundtrack to Werner Herzog’s Oscar-nominated Encounters at the End of the World. She has performed internationally in festivals and has toured with Arijit Singh, Karole Armitage, and Mansour, and new music ensembles S.E.M., TILT brass, and the mobile ensemble Asphalt Orchestra (founding member). Her well received new book, Hooked on Multiphonics, is treatise on extended techniques for trombone for composers and trombonists to aid in understanding and executing the deep complexities of multiphonics.

Below are the last moments of our performance at TransPecos — (the video is dark,but the sound is good.) See below for more videos and the rest of the concert.

Rest of the SWiTCH concert:

Rest of show at TransPecos:

Mechanique(s) is a long time aleatoric/improvised electro-acoustic computer music project of mine using live electronics, prepared guitar, voice, and sometimes reeds or other guest instrumentalists, a duo with Hans Tammen with frequent guests.  Working together since 1998 in various configurations, Mechanique(s) has been drawing on many traditions in improvised and electronic music, investigating the overlap of various elements of the performers’ technical and aesthetic practices.

In our performances I create textures, musical elements and gestures using live audio processing of my voice, the sound of the other musician’s with whom I perform, and some audio samples. I use Max/MSP, and an outboard sound processor, both with control in real-time via my voice, MIDI and Wii controllers, Morse code and my various musically mitigated algorithms and composed music processes.

I play my “instrument” by controlling and triggering these processes as musically needed and this has been my primary method of performance since 1995 — in many different musical contexts, with my electronics processing not merely acting as a supplement my voice, but as an important live compositional tool.

Hans Tammen (“endangered guitar”) works in innovative ways with mechanical preparations and for guitar (at times including brushes, small stones, a small electric fan, a cigarette lighters, an Ebow and chopsticks) and Max/MSP sound processing, with further control via the use of pitch-tracking and and a rotating cast of gestural controllers (at one time an infrared-controller to capture some of his head motion during performance). Tammen’s approach has evolved as well and since the mid-2000’s also incorporates Max/MSP in his Endangered Guitar projects.

In our trio are we have recorded with Martin Speicher (saxophone, clarinet, Germany), (recorded in the eponymous CD “Mechanique(s) 2001 live at Logos in Ghent). We have also been joined by Pascal Boudreault (Montreal), and many others over the years with intuitive, sound-oriented approaches to their instruments.

Throughout the collaboration of Mechanique(s) we have focused on the relationship of prepared and acoustic sounds to my electronics sounds, and at times with strikingly similar timbres with completely divergent means. The audio processing algorithms I use are as varied as the possible musical gestures, registers, and density of musical sounds we make, and the various kinds of audio processing intentionally create elements of surprise for each of us — as we listen and adapt our phrases, timing and sound.

All About Jazz – Eyal Hareuveni at Hafarot Seder Festival 2005 curated by Ilan Volkov in Tel Aviv:

Mechaniqe(s) Duo, featuring Hans Tammen on “endangered” guitar and lap-top and Dafna Naphtali on vocals and lap-top, came from New York, triggering their sound sources from Tammen’s “endangered” guitar, laid on a table with the strings manipulated and mutilated with sticks, straps and other objects, then with real time processing on his and Napthali’s interacting lap tops. Tammen opts for more minimal sounds that only loosely reference a conventional guitar sound and more often sounds like a distant relative of the Japanese koto; while Naphtali deconstructs these sounds into more detailed ones, pushing them into abstract and noisy realms, then layering her four-octave range vocals on top.

As part of the concert I was interviewed by Steven Swartz for (now defunct) SoundNotion podcast in episode #229. 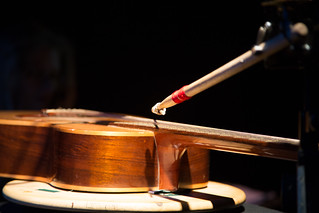